How to Reduce your Inner Thighs and Outer Thighs through Coolsculpting

Each person has their own beautiful body, and for most of us, these bodies have plenty of curves. Unfortunately as we age, some of these curves can change in size and shape, as well as develop cellulite or stubborn fat areas that emphasize our curves in a way that make us feel, less-than-confident. Dr. Michele Green is a leader in non-invasive body contouring for over two decades, and will help you reduce those stubborn fat areas in her boutique NYC private office, with no downtime and no discomfort.

All of that self awareness coupled with the popular “thigh gap” look that pervades social media can cause us to worry about the appearance of our inner and outer thigh fat. Many of us exercise work to reduce the presence of thigh fat, but unfortunately aren’t able to create the contouring that we would like. Most patients want to avoid invasive plastic surgery procedures such as liposuction and this is exactly where CoolSculpting for the inner and outer thighs comes into play.

CoolSculpting® is an FDA Cleared, non-surgical treatment for fat reduction. The technology utilizes what is known as the principle of popsicle panniculitis, which led to the discovery that fat can be frozen and reduced. CoolSculpting® can be used on various areas of the body, from the abdomen to the flanks, upper arm, or buttocks, permanently freezing subcutaneous fat. Dr. Michele S. Green is an expert in minimally invasive cosmetic procedures and was on the first dermatologists in NYC to incorporate CoolSculpting into her practice. Dr. Green emphasizes that this revolutionary technique is not a substitute for weight loss, and maintaining consistent results is dependent on a healthy diet and exercise. CoolSculpting is, however, extremely effective for treating stubborn fat areas, as can be seen in the double chin, belly, love handles, upper arms, banana roll (buttock area) outer thighs, and inner thigh region.

If you are struggling with the appearance of unwanted pockets of fat along your inner and outer thighs and are considering CoolSculpting, Dr. Green is here to help. Contact the New York office of Dr. Michele Green today to create the best customized fat removal plan using CoolSculpting for body contouring and feel confident in your skin.

Does CoolSculpting work on thighs?

Not only can CoolSculpting be done on thighs, but in fact it’s a leading approach to reducing thigh fat in the dermatology world. For over a decade, CoolSculpting has successfully reduced the appearance of both outer and inner thigh fat, as well as several other treatment areas on the body where pockets of fat can be more common. The non-surgical procedure is designed to contour targeted areas of fat cells, creating an overall slimming effect on the treated area. Does CoolSculpting work on inner thighs?

Does CoolSculpting work on outer thighs?

Coolsculpting is just as effective for outer thigh treatment as it is for inner thigh treatment for most patients. The standard treatment time tends to be a little longer–sometimes lasting up to one hour and 15 minutes–but the process is quite similar. Many patients consider outer thigh CoolSculpting treatment in order to treat the excess fat that accumulates along the widest portion of the hips known as “saddlebags”, as well as “banana rolls”, which are rolls of fat that occur directly underneath the buttocks on the outer thigh. The CoolSmooth is the most popular CoolSculpting applicator to treat the outer thigh area. If the outer thighs have a significant amount of fat, Dr. Green will commonly recommend two CoolSculpting treatments, spaced one month apart, for optimal results.

For both inner and outer thighs, CoolSculpting is revolutionary in that it reduces the appearance of thigh fat and permanently destroys fat cells in as little as one to two treatment sessions.

How does CoolSculpting eliminate thigh fat?

CoolSculpting is a revolutionary fat removal technique that was initially discovered through an observation of a classic summer activity for children: eating popsicles. Two Harvard physicians, Dr. Rox Anderson and Dr. Dieter Manstein, were struck by a phenomenon caused by eating a popsicle on one side of the mouth. The children eating this delicious treat were often left with a temporary dimple, suggesting a loss in cheek fat! With this revelation, Dr. Anderson and Dr. Manstein went to work developing a device that could permanently eliminate fat through fat freezing, which allows the fat cells to be broken down and metabolized in the body.

CoolSculpting, created by Zeltiq aesthetics, and now owned by Allergan, uses the process of cryolipolysis (AKA fat freezing technology) to not only reduce the appearance of fat cells, but also eliminate stubborn fat cells permanently. CoolSculpting applicators are designed to target fat cells along the fat layer below the skin, using cold temperature to halt the activity of fat cells and eliminate the cells in a matter of weeks. The fat cells will simply be metabolized and flushed out of the body by way of the lymphatic system. Particularly for patients who are already at their ideal weight, CoolSculpting can be an incredible way to firm target areas with little to no downtime required.

How is CoolSculpting different from Liposuction?

CoolSculpting and liposuction are similar in design in that they are intended to contour the body through the process of fat removal. However, CoolSculpting is unique in that it requires no downtime, whereas liposuction is typically performed by plastic surgeons and is an invasive fat removal procedure. Further, unlike liposuction, CoolSculpting does not redistribute fat within the body and, as the fat is metabolized, the risk of skin laxity or “loose skin” is also taken out of the equation. Does CoolSculpting get rid of cellulite on thighs?

As CoolSculpting is designed to eliminate fat cells underneath the surface of the skin, and cellulite is caused by pockets of fat pressing up from against the outer layers of the skin, CoolSculpting treatment is in fact quite effective in reducing the appearance of cellulite on the body. Its approach in targeting fat layers underneath the skin is truly unique when it comes to fat removal and cellulite reduction. CoolSculpting can reduce the appearance of cellulite not just on thighs, but also on the buttocks, stomach, and other areas. Dr. Green often combines the use of Velashape technology to target the cellulite on these areas, and leave your skin smooth and lean.

After CoolSculpting®, patients will notice a 25% decrease of fat in the area. Patients often love their results so much that they will return for a second treatment of the same area, resulting in a 40% reduction, or for subsequent treatments on additional areas throughout the body. Since the advent of the original CoolSculpting® applicator, CoolSculpting has developed multiple applicators to ideally treat the buttocks, upper arms, abdomen, flanks, thighs, and chin fat. Dr. Green offers CoolSculpting® for specific areas which are even smaller, such as the upper knee area, back fat, and bra fat. Dr. Green has has years of expertise in all of the latest CoolSculpting applicators which are designed to target all of the different treatment areas, allowing you to receive the contouring treatment you desire.

Target Fat In Other Areas

Ideally, patients should have approximately 1 to 2 inches of fat that can easily be pinched. This allows for the traditional CoolSculpting® device to properly suction to the area. However, with the CoolFit® and CoolSmooth® Applicators, Dr. Green can treat regions that are otherwise difficult for the device to reach, such as the inner and outer thigh regions.

The CoolFit® Applicator has longer cooling plates with a flatter design, allowing Dr. Green to target vertical areas of fat along the inner thighs. The CoolSmooth® Applicator has a comfortable flat design for fat along the outer thigh areas that is more difficult to pinch. Additional applicators, such as the CoolAdvantage, are also commonly used on the inner thigh. Though the CoolFit and CoolSmooth Applicators have similar functionality, the CoolAdvantage applicator is designed to work faster, typically reducing an hour-long session to a 35-minute process.

In addition to these CoolSculpting applicators, the CoolMini and CoolPetite applicators can be used on small treatment areas to reduce the appearance of fat. The CoolMini was initially developed to treat the appearance of fat cells under the chin or double chin area, and can also be used to treat small pockets of fat around the knee, surrounding the underarm, and what’s known as “bra fat”, which is a band of fat that covers the back muscles above the waistline.

Dr. Green will work with you closely during your CoolSculpting treatment process, overseeing the entirety of your treatment plan. Unlike a MedSpa where a consultation is unlikely to be with an experienced physician, Dr. Green emphasizes the aesthetic goals and safety of each of her patients to ensure that they receive the best results possible. 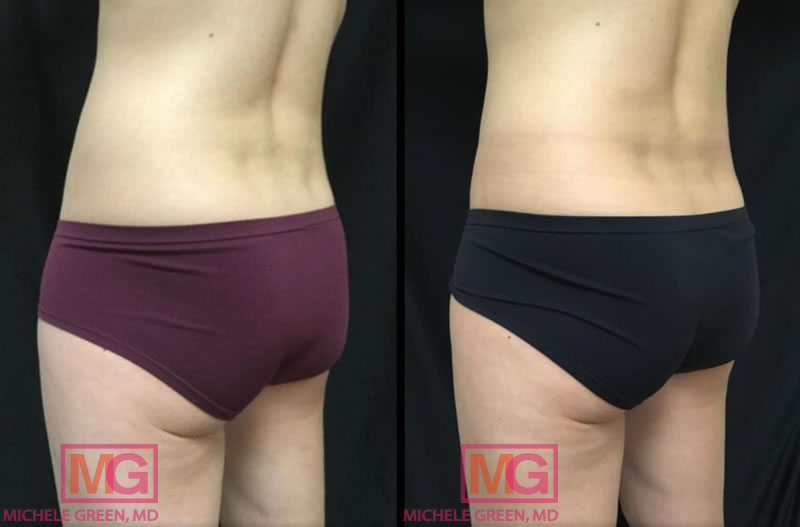 Dr. Green completes each CoolSculpting® treatment right in the comfort of her office. Most patients, she says, bring their work or an iPad to occupy themselves during the hour-long process.

CoolSculpting procedures are simple and painless. The CoolSculpting applicator is designed to apply cold temperatures to stubborn fat areas, while keeping the surrounding tissues warm. Typically, patients feel slight discomfort during the first five minutes, while the skin is adjusting to the colder temperatures. However, once the treatment area is “frozen”, this sensation disappears. Dr. Green applies a handheld device to place the targeted treatment area between two specially designed cooling panels, and when the fat cells are sufficiently cooled, the session is over and you’re free to go.

Because the treatment is non-invasive, patients can resume regular activity immediately after treatment, whether that entails returning to the office or heading to the gym. Some patients experience tenderness, soreness, or bruising around the treated area while the area “thaws”, but any soreness should disappear within the first few days after treatment.

In extremely rare cases, patients have experienced side effects of pain, but this can easily be treated with Neurontin, an oral medication, and will dissipate within a few weeks. Three to four months after treatment, patients will be able to see the full effects of the CoolSculpting® treatment.

How many CoolSculpting treatments are needed for thighs?

Typically, a single treatment is all a patient needs in order to achieve the desired fat reduction and contouring results. Some patients may want a second session in order to experience maximum contouring or to target additional pockets of fat, as additional sessions will lead to further fat reduction in the treatment area. The CoolSculpting procedure can be repeated in the same target area within 1-4 months after the initial treatment.

It’s important to note that CoolSculpting is not intended to help patients lose weight. Treatments are permanent provided that patients maintain the same ideal weight, healthy diet, and exercise routine with which they initially began treatment.

CoolSculpting on inner thighs before and after

How much does CoolSculpting cost for thighs?

How do I know if CoolSculpting is right for me?

CoolSculpting is ideal for both men and women who are interested in contouring their bodies within their ideal weight and healthy lifestyle. It’s an excellent option for those who lead a busy life and want to be able to improve how they feel about their bodies without undergoing any invasive procedures with overwhelming costs or extensive recovery time.

If you’re considering CoolSculpting treatment for thigh fat or other areas of the body, Dr. Michele Green, in New York, will create a customized treatment plan that works for your lifestyle and cosmetic body contouring goals. An expert in non-invasive cosmetic procedures, such as Botox, lip fillers, Kybella injections, Thermage and laser treatments, Dr. Green will help deliver the best cosmetic results.

Contact us online today or call 212-535-3088 to learn more about CoolSculpting and to develop a customized treatment plan.