Home Blog Skin Care Dermatology in NYC, Is living in New York good or bad for your skin?

Dermatology in NYC, Is living in New York good or bad for your skin?

From Greenwich Village to Harlem or the Upper East Side of Manhattan, Park Slope and Williamsburg to Bushwick or Prospect Park in Brooklyn, or Astoria and Forest Hills in Queens, there are plenty of New Yorkers who will stake their claim that their neighborhood is what makes NYC great for them. However, as great as living in a fantastic location with all the excitement and convenience the big city brings, this does come at a price, to your skin!

Is City Life Bad For My Skin?

From a dermatology and skin care perspective, living in NYC, or any large city for that matter, can be fraught with potential skincare problems, many of which aren’t even considered by most people. The truth is that city life can pose different challenges to effective skincare. On the plus side, there are many effective ways to treat your skin which specialists such as NYC top dermatologist Dr. Michele Green can provide.

One of the key issues which a person faces on almost a daily basis is a battle with their commute to work. For most New Yorkers the daily commute to work is just part of their routine, but what many do not realize during your commute your skin is battling against a wide range of issues from pollution, sun damage and germs. The average New York commuter faces over six hours of travel each week (source: NY Daily News) and for those who are commuting downtown from some of the further neighborhoods in Long Island, Westchester, Queens and Brooklyn this can be even longer. In addition to the length of the commute, how a person chooses to travel around the city raises different potential problems.

As convenient (or painful) as the MTA is, depending on your point of view, one of the issues for skin care is that there can be a lot of grime and dust found within the subway, bus and transit system. This pollution can build up on your skin. Those of us who are walking on the street are not immune to these issues. Pedestrians face pollution from cars, taxis, buses and fumes. 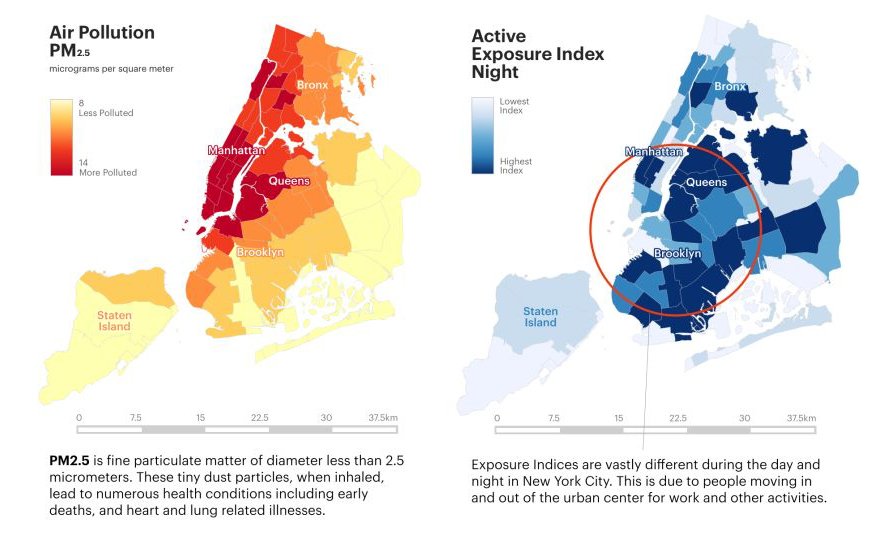 This affects some areas of the city more than others of course. In fact, a report from MIT shows that the most polluted places to live or work in NYC include Washington Heights and Chelsea in Manhattan, while in Brooklyn and Queens, neighborhoods such as Long Island City and Brooklyn Heights had the most pollution.

The main issue underlying living in a city with poor air quality is the problem that this causes to your general health. In addition to that, one research report has suggested that living in a polluted environment where issues such as Fine Particles (PM 2.5) exist can cause premature aging by up to 10% (Source: Raconteur). In addition, your skin also suffers the effects of environmental stress.

Antioxidant skincare products have become popular over the last few years because of the potential issues with pollution and skin damage. These products can help, such as MGSkinLabs Antioxidant Infusion, in rejuvenating the skin. In addition, a healthy cleansing and moisturizing regime is essential, along with a healthy diet and exercise routing to keep your skin clean & healthy. Laser skin rejuvenation can also help return your skin to its peak condition and handle the big city lifestyle.

If you went to the beach on a hot summer’s day you’d probably be sure to take sunscreen with you. However, on an summer day in New York City, when people are more likely to take to the streets and parks such as Central Park, Roosevelt Island or the Highline, the sunscreen is often forgotten.

Forgetting sunscreen is a mistake, especially for those who are out in the sun on a daily basis, where skin damage can occur without you even realizing it. If you’re picking up color in your skin, then you’re also potentially risking skin damage. Skin damage caused by the sun can be treated using a variety of different techniques, such as laser treatments, but it is better to prevent this damage in the first place by using sunscreen.

On the bright side (no pun intended), based on a survey by Wallethub, NYC is one of the top 10 cities for your skin, as well as being one of the top 5 cities when it comes to the fewest skin cancer deaths per capita and two of the other top 5 cities are nearby Newark and Jersey City. So if looking for a big city that doesn’t have as much risk for your skin, NYC might be a good dermatological choice!